Filament misconceptions, filament basics knowledge, call this one whatever you want (as long as you don’t call it a vlog)! But this video is jam-packed with info on how to pick a filament and what you should be looking for! 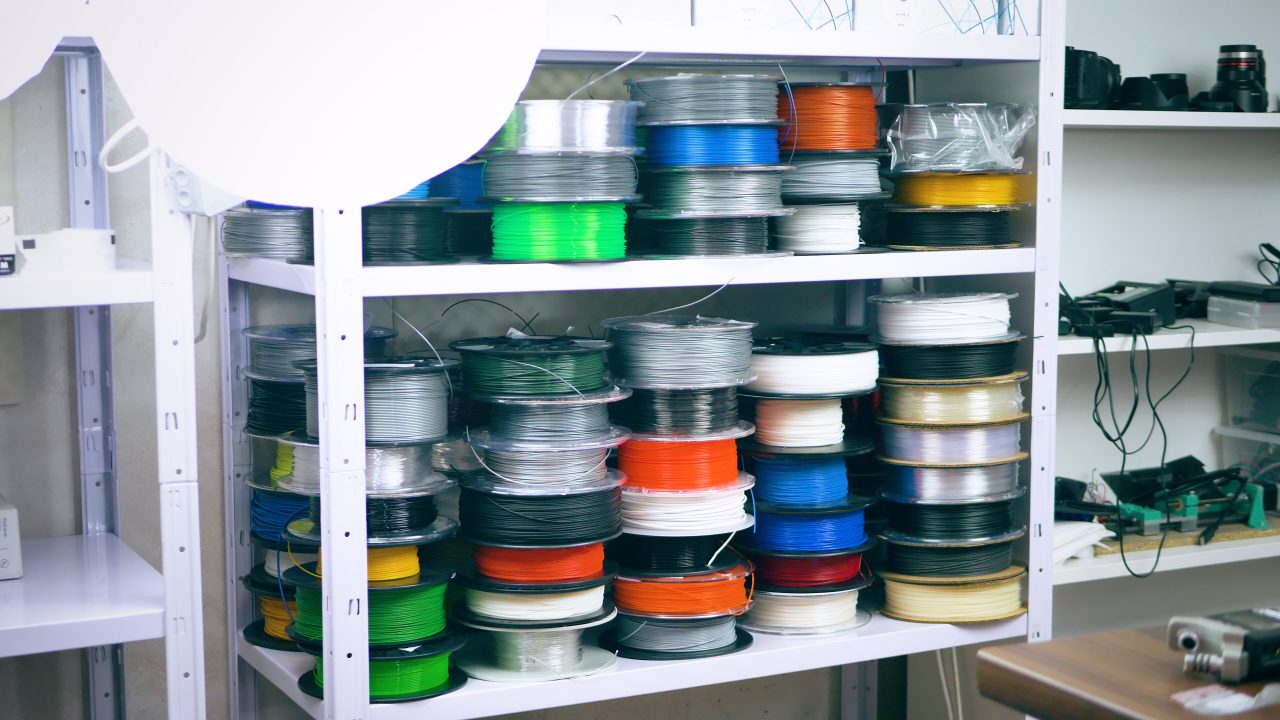 Welcome back everyone, what you just witnessed is about 174 spools of filament either waiting to be tested

or waiting to be used up or basically just looking good on a shelf.

In that neatly cataloged pile of filaments, there’s literally every single type of filament that I know of, so with this mini-series videos I want to shed some light on, well, what materials you should be using for what applications and how you can best print them all.

So this actually started out just being a single video, but there’s so much information that I want to cover that we’d end up with either half of it left out or a single video that’s almost an hour long, so I’m splitting it up into shorter videos that each cover one very specific topic. Should be a bit easier to watch. Starting with this one, where I’m going to try and clear up some myths and misconceptions about the filaments we use and give you some tips that apply to choosing, buying and using every type of 3D printing filament. Let’s go!

Ok, so back in my day, there was PLA and ABS, and that was it. PLA was kinda like the new kid on the block and was thought not to live up to the “reliable” performance of ABS, while ABS was the “go-to” choice for practically everything, but times have changed and not only have the filaments gotten better by quite a margin, but the selection has also grown to almost obscene dimensions. In addition to PLA and ABS, you can now get PETG, ASA, HIPS, PLA+, Nylons, BDP, fiber-filled version of each of those, PC, PU, rubbers, soft PLA, flame-retardant PC and ABS, non-warp ABS, Nylon copolymers, ….

So ultimately, this is an absurd amount of choices you get when printing, well, anything.

Ok, so first things first, a few things that apply to every filament, no matter the polymer you end up using.

As MKBHD likes to say: Good filaments are getting cheap and cheap filaments are getting good. There are now some amazing filaments in the lower price ranges and even high-end manufacturers come out with low-cost versions of their prestige materials that basically print just as well, but maybe don’t come in all colors or with slightly reduced diameter accuracy because it’s simply being manufactured more quickly. Though there’s still a huge quality difference in the type of resin, so the raw plastic, that manufacturers use for making filament. Maybe not so much for PLA, but for example for ABS you can get filaments at the same price point where one will give you nothing more than a goopy mess, while another makes for crisp and clean prints. Layer adhesion is another factor that can heavily vary from one budget filament to the next. You can score some amazing filaments for less than 15 bucks for a full 1 kg spool (that’s 2.2 US pounds), but there’s no guarantee that you’ll get the same quality next time you order. If you are willing to spend the time to tune in a new spool of filament before you start “productively” printing with it, pff, hah, then the super-low-end one can be worth a shot, otherwise I’d say go for the “budget” lines of the bigger manufacturers as a reliable choice unless you need the absolute best stuff for a prestige project.

Other factors are, as mentioned, the diameter consistency and air bubbles – which you can definitely see in the surface of your prints, and even the consistency of the color: I’ve had some super-cheap light blue filament that in a single print went from a white-ish blue to almost a light green and back; and also whether you trust the manufacturer to produce filament cleanly. There are reports of tiny steel balls ending up in super cheap 3D printer filament, and those balls just so happen to perfectly clog up a nozzle, but you might also get other, less visible particles in your filament, like paper flakes from bags that were used in production and those can clog a nozzle over time.

There’s also a point to be made about spools with “bad filament winding”. To reiterate, it is physically impossible for a manufacturer to wind filament in a way where it pulls itself into a knot that keeps getting tighter as you print. If you end up with that, it’s your fault and your fault alone. Sorry. I explain it all in detail here.

One last note: Avoid buying filament coils. They’re just a huge hassle to deal with, if you’re conscious about the extra plastic used for the spool itself, which is actually quite a bit by weight, well, get it recycled, or buy it on a cardboard spool, those are every bit as good as the plastic ones. And lighter, so they’ll save you some shipping fees!

Next up, I guess we should talk about the material properties that characterize any material. Things like color and opaqueness should be self-explanatory, but there still seems to be a bit of confusion on the technical properties that determine how a material will perform. Let’s touch on stiffness vs strength. High-modulus, so, stiff materials, like carbon-reinforced plastics or even just PLA will produce more rigid parts that will flex less under the same loads than a low-modulus or less stiff material, but it won’t necessarily also make for parts that will withstand greater mechanical loads which means they would take more abuse before breaking. Quite the opposite, in fact! Stiff materials will tend to be more brittle than softer ones and having a material that can flex slightly also means that the part can recruit more material along its cross-section to spread external forces over a wider area. That’s the exact reason why parts printed from fully flexible materials or even from materials that are just slightly elastic like Nylon-based ones or even Polycarbonate will feel much more robust than a fully rigid print. And… they are! So my advice: For a print that might see some rough use, pick the softest material you have that is still able to support the loads you’re expecting for the part.

Next up, thermals. No doubt you’ll have heard a material’s “glass transition temperature” being flung around. But it doesn’t mean what you think it does. Not always. Commonly it’s used to describe the maximum usable temperature for a given plastic. And while that’s often at least in about the right ballpark, it’s not really a universal measure. PLA has a glass transition temperature, short Tg, at about 50°C, which is about right, ABS at 105, Polycarbonate at 145, and that’s all pretty close to the temperature you shouldn’t exceed with that given material. But here’s the catch, PTFE, commonly used in hotends at up to 250° as a liner to keep filament from sticking to the wall of the hotend, has a Tg of “only” 115°C. Polypropylene, a perfectly dishwasher-safe plastic that is often used for food containers, has a Tg of 0°. PLA, on the other hand, definitely doesn’t survive a dishwasher cycle even though it has a higher Tg at 50°. And here’s the kicker, PE, Polyethylene, a super common plastic, has a Tg of -70 to -100°C. POM, an engineering material used specifically for its stiffness, is always used way above its Tg of also -70°. That’s -94°F, which is quite cold, actually. And the list goes on, most flexibles have a super-low Tg in that range as well. And this is all because Tg is just a material science property. It doesn’t tell you when a material becomes too soft to use, it just tells you at which temperature the actual polymer has completed its transition from a glass-like state to a rubber-like state. I mean, it’s called the “glass transition temperature” for a reason. But many materials actually need to be used in their rubber state or are usable in either one, so just going by the glass transition temperature to determine whether

There are some other tests that actually determine a softening point for a material, but pretty much no manufacturer gives you those values, so really the only somewhat practical measure for how well a material stands up to high temperatures are practical tests. [whisper: Filaween]

And this one I kinda want to touch on because it’s rarely mentioned: Material density. Basically, how much volume, how many cubic centimeters or cubic millimeters you get per weight. And there is actually quite a difference! PLA, for example, is some of the heaviest material you can use. It clocks in at 1.25g/cm³, so a solid 1x1x1cm test cube, which I can’t really show you right now because I’ve never printed one, that weighs 1.25g. Printed in ABS, the exact same cube weighs just 1.04g, so the PLA cube is actually 20% heavier. By weight, you have used up 20% more filament. Same goes for any other object, but it also goes for how much filament you get in the first place when buying a spool by weight. And surprise, surprise, an 800g spool of ABS will give you almost the same amount of 3D printing fun as a full 1kg spool of PLA. Your 3D printer doesn’t care about how heavy a material is, it really only cares about volume.

Filaments with metal particles or fiber and stuff added in are often even denser than PLA by a fair margin. So just keep your eyes out, something like a 250g test pack of bronze fill is going to be almost gone in a single print.

And lastly, what about recycling or actually bio-degrading the printed parts you don’t need anymore? Well, you might have heard the bit with “ah, yeah, PLA is a bioplastic and is compostable” – that’s technically true, but your compost pile at home will not be able to break down PLA in a reasonable timeframe. I’ve tried, doesn’t work, you actually need an industrial, high-temperature composting setup for that. I think it’s still better than melting dinosaurs for 3D printing, but some of the other biomaterials are actually much easier to compost or bio-degrade than PLA. For material recycling, unfortunately it doesn’t look too much better, either. Again, theoretically, almost all the materials we’re printing with can be recycled, ground up, and reused, it’s pretty hard to get them on the right track for recycling. First of all, there’s very little of a chance of a printed parts being sorted for recycling just from your regular residual waste, but even if it was, it’s quite hard to sort them by plastic type. Typically, recyclable materials have the material indicator sign thing on them that specifies what plastic it is, but your 3D prints, well, don’t. There’s been an initiative once to provide those recycling models for you to stamp into your 3D models, but it never really caught on, so today we’re left with a bunch of 3D printed parts that are impossible to sort. So, maybe use filaments that don’t have as much of an impact or are even made from recycled materials in the first place!

Alright, that should be a good basis to move on to the specifics of each material. If you liked the video, you know what to do, and if you loved it, make sure you’re subscribed and have that bell activated so you don’t miss any of the other videos from the series!

Thank you to Aprintapro for sponsoring the series!