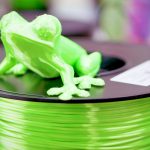 Modified PLA is still hot and trendy. This is the far-east Torwell “Silk” filament, a super-glossy, softer type of PLA!

Torwell might not be a name you’ve heard of before when it comes to 3D printer filaments, and as you might have guessed, they are a far-east manufacturer producing all sorts of materials. 3D Grottan actually handed me this spool of Torwell Silk at the Sweden 3D printing meetup, usually selling for about 31€ per kilogram, and was like, hey, yeah, maybe try it out? So I did! It’s one of the trendy metallic-pearl-silk looking, modified PLAs that are supposed to mimic the tougher ABS materials.

In my experience, whatever they put into these makes the filament softer, but not necessarily stronger. The recommended temperature is 205°C, with a range of 190 to 210C given. This matches up with my calibration prints and I used 205°, a 50° heated bed, 105% flow and the fan on full blast, as is common for PLA. Print reliability is fine and just as good as regular PLA, and can definitely print this without any changes to a standard PLA setup.

I personally find the gloss a bit too aggressive, it looks great on this slightly-low-poly treefrog printed with super low accelerations, but on regular prints, the gloss mostly serves to amplify any print quality issues your printer might have. Torwell Silk overall prints well and gets five stars for quality.

Mechanically, it does confirm what I’ve seen before – it’s tough, but more in a chewing-gum-kind of way. The printed spring indicated a rigidity of less than half of regular PLA, and it also continued to sag under the 1kg weight. Other filaments do not show this, which means Torwell Silk might be a poor choice for mechanically strained parts in the first place. Layer adhesion is also somewhat poor, I broke one 3DBenchy when popping it off the printbed, and the brim of most parts peeled off very easily with low adhesion to the rest of the print.

The IZOD-like impact test show an impact resistance almost as good as ABS, at about three times that of regular PLA. Pure mechanical strength is ok, but again suffers from somewhat low layer adhesion. And just like other PLAs, it doesn’t really stand up to heat all that well.
Overall, the rating sheet comes out at 4 and a half stars, so if you’re looking for an easy, well-printing material with unique looks that you maybe won’t be using under high mechanical stress, then Torwell Silk PLA is a good choice.

We use cookies to ensure that we give you the best experience on our website. If you continue to use this site we will assume that you are happy with it.OkPrivacy policy