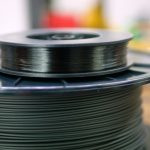 Markforged’s machines don’t print many materials, but considering how well their Nylon-based ONYX tested, there might not even be a need to use anything else. And you can make it even stiffer and stronger by adding more and continuous fibers to it!

Yo dawg, i heard you like carbon fibers, so i put carbon fiber in your carbon fiber filament so you can add carbon fiber while you print with carbon fiber. Yeah, that’s pretty much the idea with Markforged’s ONYX filament if you use it with some extra continuous carbon fiber. The ONYX itself is Nylon-based and contains a liberal amount of chopped carbon fiber. It’s made specifically for Markforged’s line of printers and comes with a hefty pricetag of around 314€ per kilogram, making it by far the most expensive filament included in the Filaween series yet.

The continuous carbon fiber is used as longer loops in strategic locations of the pritns, but does clock in at around 2500€ per kilogram. While there’s not much keeping you from using the 1.75mm ONYX in other machines, i printed it with the Mark Two using settings that closely match what i use on the other episodes. Markforged uses a print temperature of 275°C and an unheated, but enclosed bed with a Garolite surface, covered with glue stick. Just like other Nylon filaments, ONYX is very hygroscopic and needs to be kept in this airtight drybox. As expected from an integrated ecosystem, this results in clean and crisp prints with the 3DBenchy and the Overhangs test coming out flawlessly, no stringing but slightly mangled tips on the fine details part and decent bridging results, netting the ONYX + Mark Two combo a very good 18 out of 20 quality score. When it comes to the strength of the printed parts, the overall increased flexibility over standard plastics and the high elongation at break means that the bend tests didn’t really fail, they just kinked and mostly sprung back into shape.

What’s really interesting here as well is that even the pull test rings didn’t fail at the max load used in these Filaween tests, which puts the Markforged ONYX at the very top of the scoreboard, though, again as this wasn’t printed with the exact usual test setup, this isn’t perfectly comparable, but very impressive nonetheless.

Now let’s add a few continuous carbon fibers into the mix. As the machine had trouble finding space for extra fiber in the vertically printed parts, where fibers parallel to the layers wouldn’t have helped much anyways, i only tested the horizontal parts. Even with only a light quantity of continuous fibers, the increase in stiffness was immediately noticeable, and the deflection at a 1kg load only reads a quarter of pure ONYX. The amount of continuous fiber was roughly the same as in this quadcopter frame printed with the transparent Nylon instead of ONYX. While the continuous fiber reinforced part did put up a better fight, it did still eventually kink, supposedly tearing the continuous fibers inside. The pull test did actually snap this time, but did so while keeping its shape much better than the pure ONYX part, which only survived after deforming a large amount.

And just as the icing on the cake, the heat resistance of ONXY is about comparable to ABS, which means it’s only ever so slightly softening up in boiling water.

So while these materials are definitely not something you’d use as a substitute for PLA, ONYX and the continuous carbon fiber, and for that matter, the other fibers like glass fiber or Kevlar, offer exceptional performance all around. And if you have the right application, a 3D printed part using continuous fiber reinforcement can definitely compete with parts machined from solid aluminum. And that’s worth something on its own.

We use cookies to ensure that we give you the best experience on our website. If you continue to use this site we will assume that you are happy with it.OkPrivacy policy